Today OpenMobilityData released a number of improvements to the web site in order to make browsing and discovery of open GTFS feeds simpler.

In addition to no longer requiring registration to access most parts of this web site, we've also added the features below.

Starting today, you can now view details of all routes, trips and stops contained within a GTFS feed.

Using the San Francisco Muni GTFS feed as an example, here's what it looks like to view today's N Judah trips. 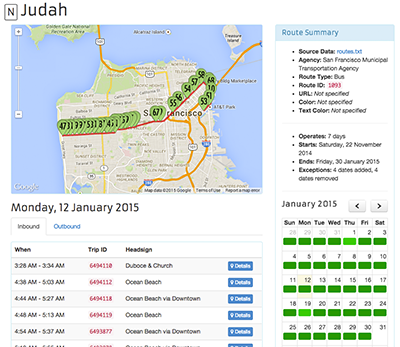 If you drill-down on one of the listed trips, you can view its respective stopping pattern.

And finally, you can select an individual stop to view additional details, such as which routes operate at that stop and when. Here's what the Metro Embarcardero Station looks like. 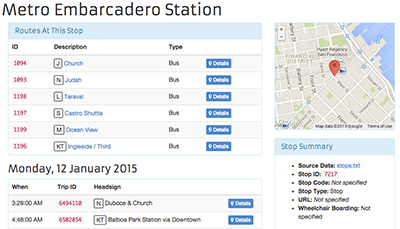 It is now possible to define a "normalization chain" for any given GTFS feed, allowing you to use a cleaned-up version of the feed, rather than the original. This is the normalization chain for San Francisco Muni: 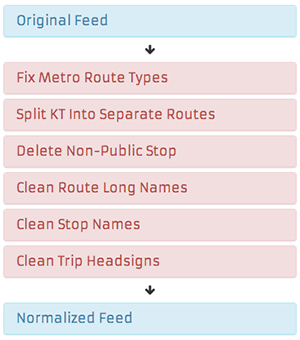 Even though GTFS is a specification for representing public transit data, data providers often interpret the specification slightly differently. This means there is little consistency across feeds.

You can compare the normalized version of the SFMTA feed to the original:

Note: At this time the only feed with a normalized version is San Francisco Muni, but we're planning to gradually add more normalization rules.

Finally, for any newly-added feed version added to this web site, you can now download the individual files within that feed directly.

Previously, you could download the feed as a whole or view snippets of individual files. Now all files are directly available without the friction of having to download a huge feed in order to view a tiny file.

Using the latest routes.txt version from SFMTA as an example, you can now click the View File link to view the entire file. 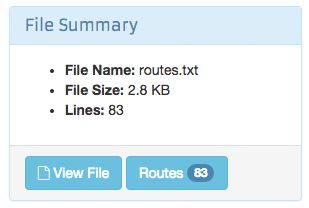 If you have any questions, comments or suggestions, please submit them on GitHub. If you're new to GTFS and would like to learn how to use it in your own projects, please buy my GTFS book.